"Death to the Varangians" "Clash of Warlords", 6 points

My SAGA gaming friend Phil Fores, is determined to beat down my Varangian tank. The following is the saga of Phil's attempt to do so with Harold Godwinson, and brothers, along with his AngloDanes. Control of the fork, 5 points along with casualties, or death of the warlord. 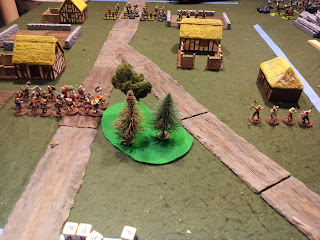 Hardradda and the Varangians , 12 man unit in the middle, Bezerkers on the right, and a unit of Bondi on the left. 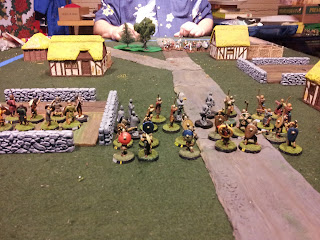 Godwinson's and their forces. Ceorls in the field on the left, Godwinsons in the middle, a unit of Huscarls behind them. Bow armed Geburs on the right, a 8 man unit of  Huscarl Dane axe unit behind them. 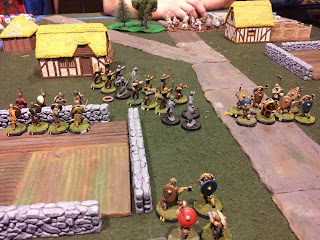 The Geburs moved to the left and setup to harass should the Varangians take the fork. The Ceorls moved forward to cross the wall and prepare to guard the Geburs from the impending attack from the Bezerkers. 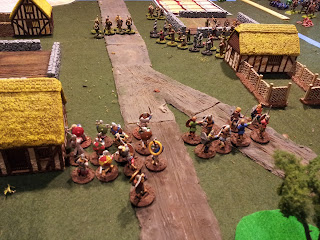 Harald and the Viking warband move forward to take the fork, while Bezerkers move around on the right to attack the flank. 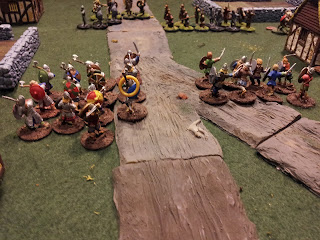 With Harald's forces taking the fork, Godwinson pulled his Geburs back, their bow fire not yeiding expected results. Also a unit of Huscarl move forward to reinforce the Ceorls, facing  the Bezerkers. 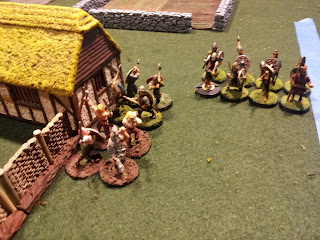 Seeing the Ceorls positioning themselves, the Bezerkers determine to charge into them when the Huscarls round the corner of the building. They then charge the Huscarls with cries of Thor, Ullr, and Frigg. The result, both combatants wiped out in glorious carnages, with the Ceorls cheering with dismay and relief. Thinking to attack the Viking from behind the Ceorls rush forward, not expecting to be stopped by one lone Hirdsman warrior. 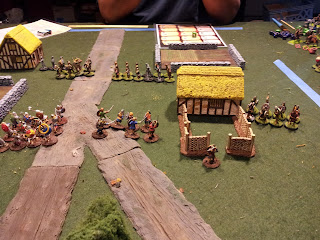 Harald, upon hearing the roar of the battle rushes to join the battle, 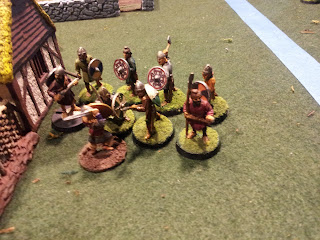 Harald Hardradda rounds the corner of the fence and witnesses the carnage. Seeing the Ceorls rushing forward,  Harald charges forward out numbered 8 to1, shouting Thor,Ullr and Frigg. Three Ceorls fall in the first round of melee and a fourth in the second round, and the Ceorls fall back. 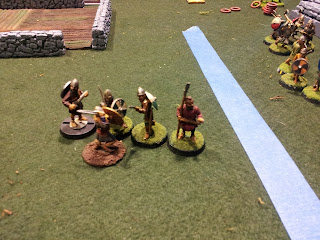 Harald enraged and bloodied again charges the remainig four Ceorls and slays another, again the Ceorls fall back, leaving the bloodied and worn King cursing them. 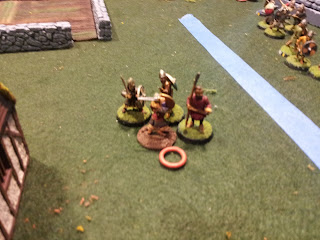 Sensing, Hardradda is at the end of his strength the Ceorls rush forward to exact their revenge. 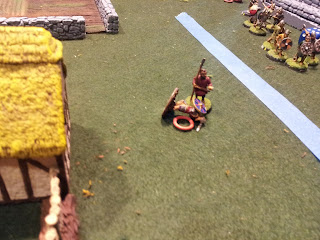 This was to be Harald's final battle, taking two more Ceorls lives before falling to a grievous strike.

Yes, it would have been prudent for the warrior king to have returned to his Varangians and laid claim to certain victory, or wait for his Bondi to join him,  but that's not what sagas are written about. A sure path to Valhalla for a mighty warrior, fallen in glorious battle.

Both sides had proxie banners, but they were never used. SAGA dice were used for SAGA abilities.