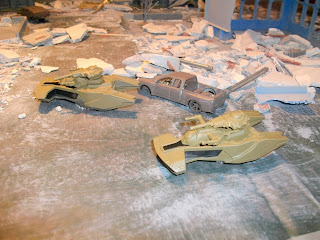 Two new grav scouts show up in Old Detroit.
These are my latest additions to my Tomorrow's War forces. A third command variant is in the works and will be posted with finished paint jobs and appropriate bases. I will also post a how I did it with pictures.  I think this is a major reason I like this game, I love to kitbash.
Posted by sureshaker at 10:13 PM 2 comments: 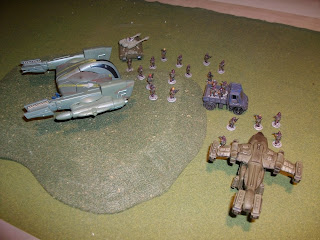 My newest addition to our toy collection, definitely the alien tech look I been looking for That's a Rebel Mini dropship for size reference.  Still need to repaint, haven't decided on colors though. It needs a chin gun, the some type of additional belly pod for troops. Any suggestions anyone.
Posted by sureshaker at 6:59 AM No comments:

I love playing Ambush Alley's Games. Ever since Shawn, Peggy and the AAG gang showed up at Recruits-Con here in Kansas City a couple of years ago, we've enjoyed playing their all rulesets. Tomorrow's War has been our latest infection.

The following is a brief account of our first Tomorrow's War encounter, "Lost & Found"

Charlie Squad of  1st Platoon finds suddenly finds  it's routine patrol turned into a footrace  to make contact with a downed pilot, before the DPRG lays hands on fantastic propaganda  coup!

Intel has it that the last know position of the downed pilot was in a abandoned building on the south  side of a stream, in the Foix Gap, near the DPRG boarder. As we approached the location from the north,.I spit the squad into three fire teams.  I would take FT Alpha, led by Cpl. Yates and take up position in the ruins across the stream from the target building. Cpl. Williams led FT Bravo though the woods on the right flank, and Cpl Pappert took FT Charlie on the right. We knew the DPRG patrols would be arriving soon, and were probably already here. We had to move fast before a larger DPRG force arrived. The plan was for Alpha to cross the stream, secure the building, and contact the pilot. Bravo and Charlie would provide flank security. 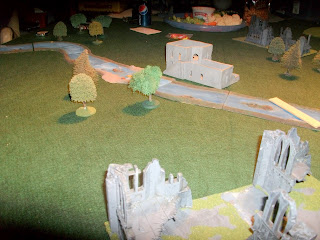 Everyone was in position, time to act. 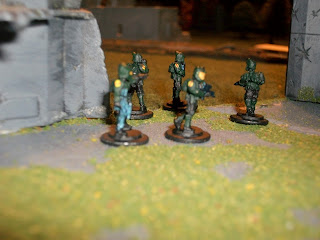 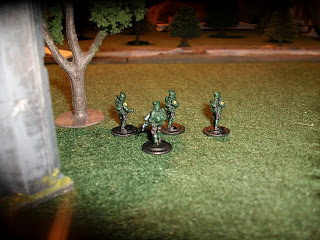 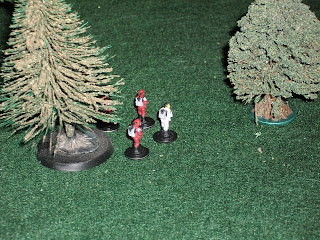 I led  Alpha in a dash to the stream, it's shallow banks would provide some cover if we could not reach the building. 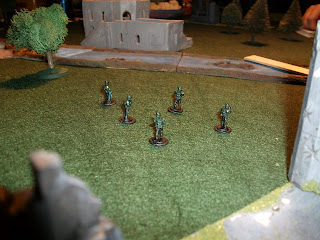 A DPRG troops had burst from their hidden position in the woods hoping to cut us down in the open. It wasn't DPRG guns we heard, but Cpl. Pappert and FT Charlie. Just as the DPRGs burst from cover, shouting  orders and curses, FT Charlie, reacted first and fast. The whole DPRG FT fell like wheat before the sythe, without getting a shot off !  Was that Cpl Pappet yelling "Get Some, Get Some", Yeah it was. 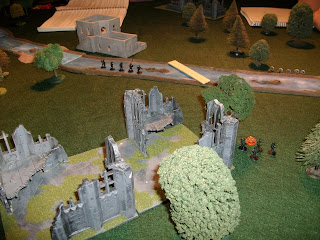 As Alpha jumped into the stream, more gunfire was heard to our left...... 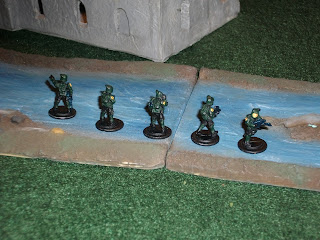 Cpl. Williams and FT Bravo had come under fire from a DPRG troops hidden in the stream bank to their far left, and took casualties, while advancing to a copse of trees. Apparently the DPRG had anticipated our mission and had arrived before we did. Cpl. Williams reported over the com, that another DPRG unit had emerged from the woods across the stream and Bravos was taking fire from them also. 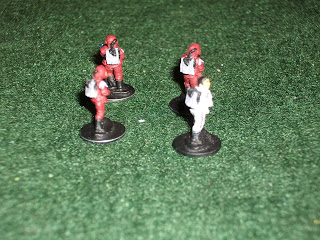 I wondered what we would find when we entered the building, there was no sign of the pilot in building, but there was no DPRG fire coming from it either. Maybe we got here in time? Only one way to know for sure.

Cpl. Williams and Bravo were in cover and holding their own, but the DPRG troops was slowly moving towards them. The first DPGR unit was using the bank of the stream for cover, while the second group, advance through the woods towards our target building. Bravo would need help soon.

I ordered Cpl. Pappert and FT Charlie to advance to the stream and take up position on the far bank, and cover our advance into the target building. Cpl. Pappert wanted to advance to the unit the had fired on and finish them off,  Typical of Pappert, he wanted more ears for his collection, that would have to wait.

Sounds of an intense firefight in the direction of Bravo indicated time was running out. With Charlie watching our right flank, I led Alpha out of the stream and started to enter the building. That's when Cpl. Pappert shouted over the com, "More DPRGs heading your way from the ruins  south of the building". I asked how many? Did it matter, we were going in anyway. 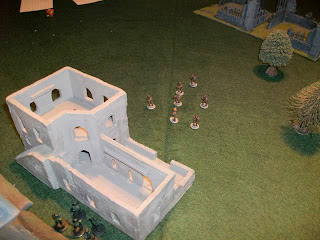 Then again with the deluge of gunfire from Charlie, and over the com the yelling of "Get Some, Yeah! Get Some".  Thank God he's on our side! 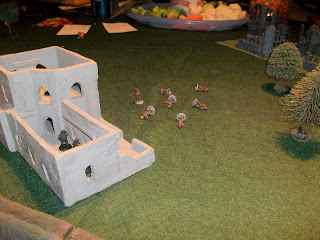 We jumped through the windows and crossed to room to see one lone DPRG trooper standing in shock among his fallen comrades. Yeah, we smoked him.

I ordered Cpl Yates to the east end of the building to engage the DPRG troops that were pestering Bravo. I then ran upstairs and found a very grateful pilot, he had watched the DPRG troops as they moved into the area, but was unable to warn us. I checked his injuries from his hard landing, nothing serious, bruised ribs,  sprained ankle. and a goose egg on his forehead. I got him to his feet and got on the com " Let's finish this up,now"

After Bravo and Alpha drove off and killed the remaining DPRG troopers, we left the building.. I called out over the com, "OK, Marines, the package is secured, party's over, let's go. Mad Dog that means you too, finish up!"
The pilot safe, a few wounded and no friendly KIAs, just another day on the job.

The DPRG player after his first troopers and last activated troopers were smoked, by Mad Dog Doug Pappert. 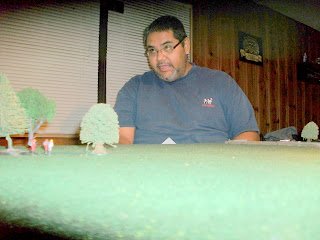 "Someone check those dice! Do they only have 7&8s on them?" 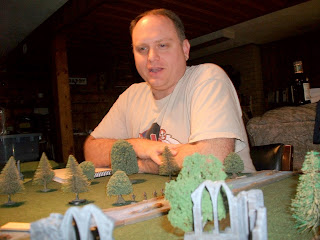