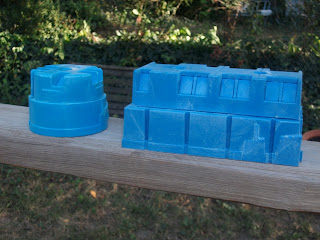 A while ago on TMP, someone posted an idea to cut down the blue electrical junction boxes. I had a bunch of them sitting around and decided to give it a go. I went out the garage where I had a wood band saw and had at it. I was very pleased with the results. Be warned it requires a steady hand due to the sloping walls. 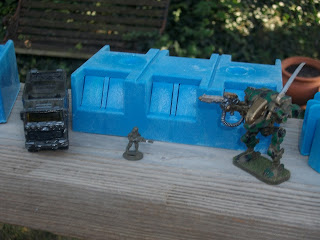 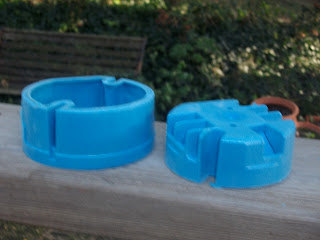 As you can see things worked out well.   More to follow

Fields Of Honor a Gamers Buffet

I went last weekend to a great  gaming convention in Des Moines, Iowa. I had nothing less than an awesome time, and regretted that I had to miss the Sunday morning set because I had to get back to Kansas City to work.
Fields of Honor is run by a great group of people and is filled with friendly enthusiastic gamers, and great games to be played. Featuring a good mix of historical and fantasy miniature games, with RPG and board games also.
Friday night, "Approach to Arnhem", double blind. 15mm, WWII rules by Trent Burg. 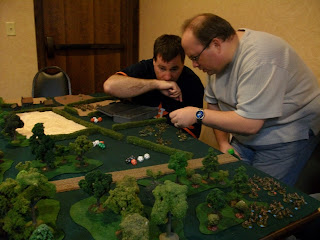 I played British Paras. Here we are setting up, a cautious entry, as the Germans could have setup anywhere on the map. Our mission was to cross the board through the city and get to the bridges with as many troops and equipment as possible. 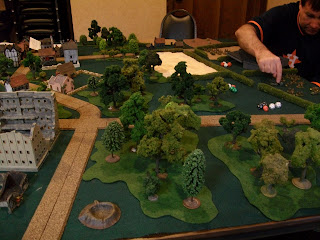 Trent did a great job setting up two identical boards. For a double blind it proceeded at a brisk pace.

Saturday mornings game  "Inn of the Crescent Moon". 28mm fantasy, rules by Ryan Skow.
The Crescent Moon Inn and Songhouse is being looted and monsters are on the loose! You will control a single hero with the goal of securing as much treasure you can. You can choose to work with the other heroes or face the monsters and traps alone - keeping the treasure all to yourself! 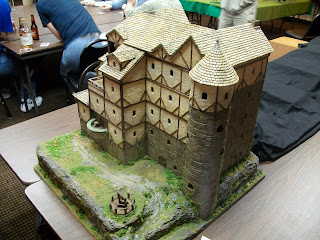 This was an amazing piece of work! Six highly detailed levels. I must have took 50 pictures. 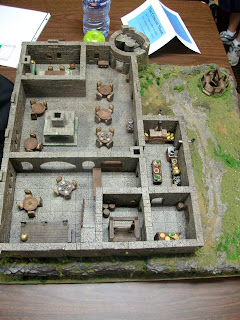 Plenty of action and surprises kept this game absorbing.  This is the ground floor to give you an idea of the detail. I will post more pictures later.

Saturday midday "Rhodesia-Operation Uric" 28mm "Force on Force" rules terrain by Ryan Skow
1979 near Gaza, Mozambique. The Rhodesian forces have been deployed to neutralize a training camp which serves as a major gateway for ZANLA guerrillas into Rhodesia. 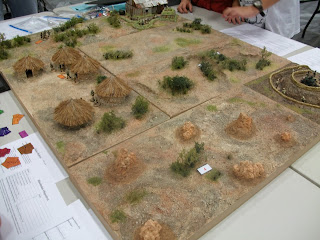 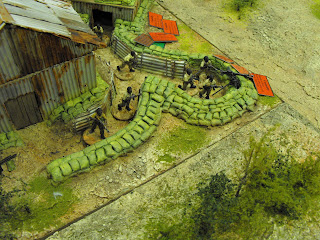 I was amazed at the detail of the terrain. A well thought out game with plenty of action, in a not often played theater in the US.

Saturday eve was "Commandos to the Rescue" 28mm rules by Trent Burg.
July 1944, a french resistance leader has managed to get himself captured. British commando's are sent to rescue him before he spills his guts to the Gestapo. 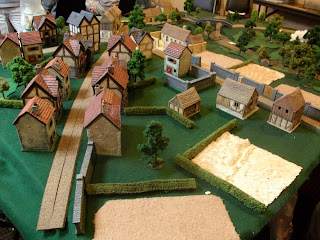 This was a blast. The first half of the game was spent creeping into the town encountering patrols and random drunk German officers. Barking dogs and random traffic kept the tension high. As we about to assault the Gestapo house a staff car pulled up with a German general and his aids. After some intense floor to floor, fighting inside the Gestapo house, we made off with our package and a annoyed German general in a commandeered lorry . Lot's of tension, surprises, and action, kept us on the edge of our seats. I'm making plans for my own version to run.

Sunday,I would have liked to played in Jeff Hyland's  Lots of Gauls" a 15 mm "Hail Ceasar" rules, but I had to get back in time to work that evening. Next time I'll take more time off. There were many more great games as well as a silent auction.


Posted by sureshaker at 4:01 PM No comments: