This will be our clubs first attempt at GruntZ. We have been playtesting Tomorrow's Wars for some time now, and decided to take GruntZ for a spin. We played two sessions with the same scenario and varied the forces, and had a great time. Gruntz is easy to learn and well presented. the only minor complaint was that because it depends on profile cards, it doesn't have gun charts. We used the profile cards from the Yahoo group and made do with some modifications.

The scenario was a Sahadeen force and Titan Marine force competing over a fallen VTOL. Yes, those are AT-43 Kolossus walkers from my Highlander Space Bug army. We left them out in the 2nd game.

The objective: Downed VTOL with valuable weapons and data to be retrieved. Dead crew scattered about. 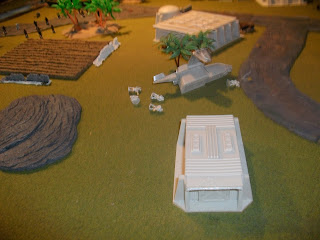 Sahadeen forces on the move, Infantry with two heavily armed APCs, and a salvaged Earth Force HAMR. These guys have loads of RPGs that will make for their lack of mechanized forces. 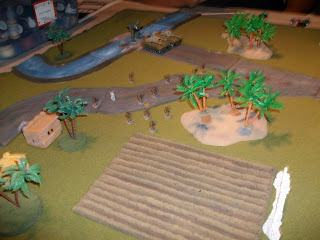 The Titan Marines arrive, ready to claim their property. Three squads of marines, a light and medium HAMR, and two heavy walkers. 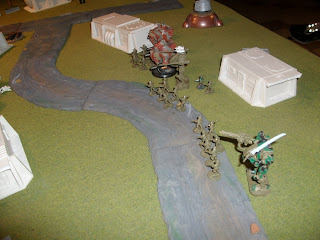 Sahadeen forces moving on objective but were slowed by river crossing. 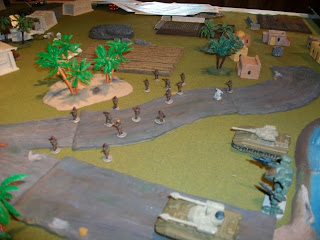 Titans have moved quickly and are ready to secure the crash site, but the Sahadeen are close and determined to make a fight of it. 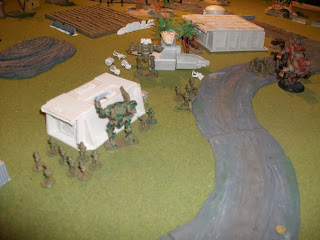 Sahadeen fire on the Titans is intense with RPGs flying about furiously, but none have scored a hit. The Titans have smoked a Sahadeen APC though. 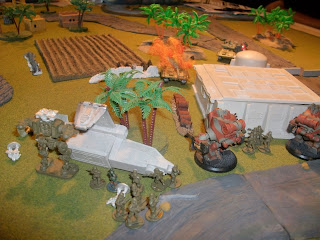 But the Sahadeen are moving in under cover of their HAMR and remaining APC. 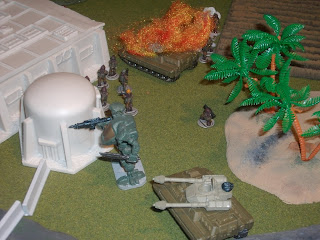 I've got to order those Sahadeen Warrior Maidens! 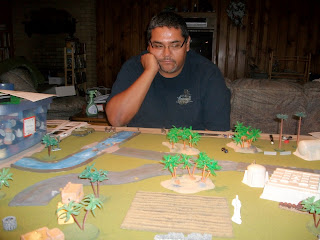 End results, Sahadeen withdrew, Titans secured the crash site.
GruntZ is defiantly fun and a good intro to SciFi 15mm, allowing players to jump right in with infantry and vehicles. Profile cards are a great idea, and we're looking forward to Robin publishing more in the future. The rules are laid out well with plenty of color illustrations, short, sweet and to the point!
Posted by sureshaker at 4:04 AM