Tonight brought another boardgame night at Angela and Donnie Williams home. This  time it was Flying Frog Productions, Fortune and Glory, the Cliffhanger Game.
The setting for this pulp action adventure set in then1930s. Full of action and adventure, loaded with exotic locations, treasures, mobsters and Nazis. Players take on the roles of uniquely talented adventurers.  I felt like I was playing in a Indiana Jones adventure movie.
I had bought this game shortly after playing it once at ConnCon. I was impressed enough to shell out the $80 for it. I really like Flying Frog's stuff. Fun games, well constructed, high on replay value.
Tonight was a three player game, like my first experience. Donnie had play in an eight play game at Ted Conn's and was more familiar with the rules, so he ran the game. After set up the game ran smoothly, stopping only to clarify a few points with the rulebook.The game was eventful with a lot of unexpected events with players and npcs in the game, Mobsters, Villains , and Nazis  seemed to be around every corner to thwart our endeavors. 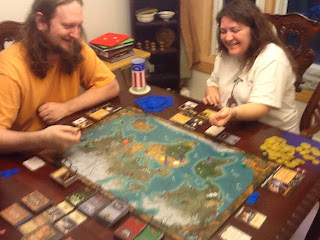 The game is designed to accommodate up to eight players, but plays best with three to five, more if experienced players. We played about fifteen turns in three hours, referencing  the rules to be sure we were doing thing correctly. Donnie took the lead at the beginning of the game, with Angela close behind.. It wasn't until the last third of the game that I finally made progress. Angela pulled a coup when a Villain beat her to a artifact, and the Angela snatched from him. I used all my resources to slow her down but in the end it was not enough.
Fortune and Glory is a great game.  I can heartily recommend it.